Wow this name is cool, not sure if it is his real one thou. Boy do they start young (he is younger), lets hope he is legal >.<

A quick glance thru Facebook yielded nothing but he did reveal his name (Jonathan Tay) and course (TP Mechatronics). 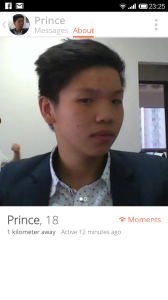 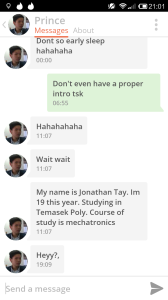 Ok at least he sounds decent, thou a little desperate. I would assume that fellow bros would ask for a relationship in that manner perhaps in the late 30s when the family concept roars to number one and you are afraid of dying alone…

Attempts to probe into his “experience” is rather hilarious, I could totally imagine a little kid in the school yard boasting about his achievements (albeit fake ones). Lies that crumble upon scrutiny, just like his nice guy although despo image. 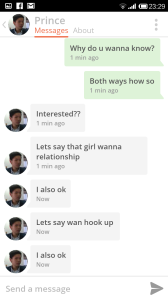 Haha I must say this is one of the funniest lines ever. He is so accommodating, anything also ok.

Man you got to appreciate his dedication to manscaping and his girly expression of “I am so cute, fuck me” 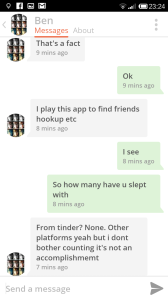 So our dear Ben here plays this apps for hook-ups but initially wasn’t man enough to admit it. It does pose a question on his manhood and his fuck hard statement. Being a modern guy, he spreads his net widely into other platforms as well haha. But ever modest he does not boast about his scores! Good job Ben, brownie points for you!

After a few rounds of rejection, lo and behold the pity card is played. Poor Ben has been single and hasn’t been meeting girls :(. We would give him a pat in the back. Not sure how appealing is the pity card for girls, readers do let us know 🙂 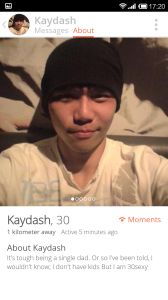 So we had a little game of 20 questions

So he had a few flings outside..

Was clearly an actor

My what a generic name and what a strange tag line….

And here we go…

I  am going to try a tinder experiment for Singapore users to see how many wacky peeps are there on the app!